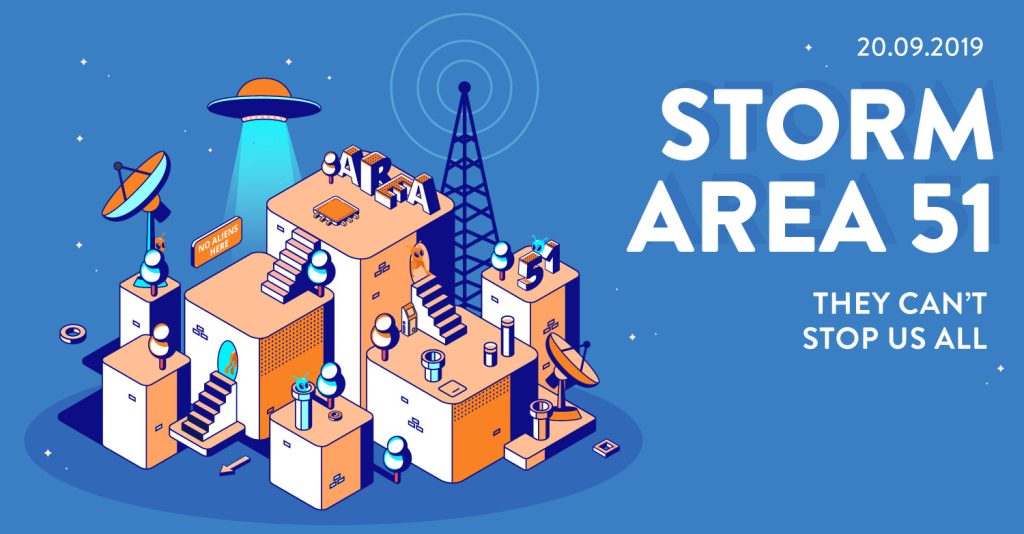 So what’s the deal with ‘Storm Area 51’ in the news? And why should you care?

It started with a satirical Facebook event, ‘Storm Area 51, They Can’t Stop All of Us,’ and turned out into a viral sensation that inspired thousands of memes all over the Internet, with tags like ‘free the aliens’ and ‘let’s see them aliens.’

California college student Matty Roberts, who posted the event planned for 20 September 2019, invited people to raid the controversial area in Nevada – known as a US Air Force training facility – in search of alien life.

“We will all meet up at the Area 51 Alien Center tourist attraction and coordinate our entry. If we naruto run, we can move faster than their bullets. Let’s see them aliens.”

Close to 2 million Facebook users, alien fanatics and conspiracy theorists (remember the famous ‘40s Roswell crash incident which started all the alien rumours), said yes. It prompted all sorts of random jokes and memes about the whole mock event.

An infographic is a visual representation of information designed to make the data easily understandable at a glance. People use infographics to quickly communicate a message, to simplify the presentation of large amounts of data, to see data patterns and relationships, and to monitor changes in variables over time.

Our team has put together a cool  ‘Storm Area 51’ infographic based on random bits and popular memes inspired by the event. See it here!

Roberts may not have expected to create the year’s most popular meme so far (or did he?), but the fake event has certainly attracted lots of attention, including celebrities.

“I will provide one of my flamethrowers to anyone trying to storm Area 51,” tweeted Space X CEO Elon Musk. Meanwhile, the US Air Force and the FBI issued a serious warning to keep away from the area.

“This is a joke, and I do not intend to go ahead with this plan. This came up as a pure struck of imagination, it was meant to be funny,” Roberts said in an interview about the event.

He has come since with new ways to capitalise on the craze, taunting the idea of turning the supposed raid into a fully-fledged ‘out of this world‘ music festival with up-and-coming indie rock and EDM artists. That’s more likely to happen.

The point is: Whether the raid happens or not (we think some crazy fanatics out there may try it), the viral response was enough to get individuals and businesses on the ‘Storm Area 51’ bandwagon and unleash their creativity in cool ways.

That’s the power of things going viral, and it can quickly turn into a marketing advantage.

So far, the epic raid inspired online games and an Area 51 Invasion Squad t-shirt line. Scotland has now its own ‘Storm Loch Ness’ event. ‘Storm the Vatican’ is also trending. Hotel bookings have boomed around Nevada. Worldwide, companies and charities are rushing to cash in on the mock event. And it goes on.

So yes, a well-crafted flippant joke can get enough attention to launch an entire craze.

Infographics are more than just a fun resource. Use it a marketing tool filled with potential. Let’s create incredible infographics to wow your audience!

Want to create the perfect infographic to promote your business, but don’t know where to start? Contact Digital Cloud today!

The Do’s and Don’ts of Infographics

3 Tips to Get More Out of Your Visual Content

We use cookies to ensure that we give you the best experience on our website. If you continue to use this site we will assume that you are happy with it.Ok